South Australia’s Surveyor-General, George Woodroffe Goyder, arrived in Port Darwin on 5th February 1869 with a team of 135 men to survey land for a settlement. His ship Moonta dropped anchor in the harbour that afternoon and Goyder with a small party rowed ashore in a small boat to explore the land. They set up camp at Fort Point on the waterfront near the present site of the Deck Chair Cinema. Over the next 7 months, the team surveyed four townsites and rural land for a settlement that has since evolved into the city of Darwin and places beyond.

The mission of the National Trust Northern Territory is to promote and protect our cultural heritage – the stories, the people, its land and its buildings. So, in keeping with this mission the Trust organised the first Goyders Day in 2008 and has continued to do so each year on the 5th February.

The early events were held at Jervois Park near Goyder’s Fort Point campsite. The program included a re-enactment of the arrival of Goyder and party by small boat with their survey instruments to commence the survey. The boat crew, in period dress, then joined the assembled crowd on shore and celebrated the occasion with speeches, displays, entertainment and refreshments. Well known Darwin identity Daryl Manzie was a regular MC for the event. 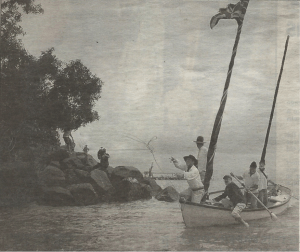 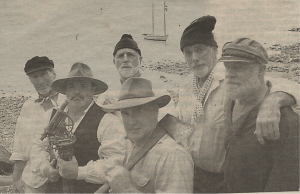 Photos:  Re-enacting the arrival of “Goyder” and crew at Fort Point, Port Darwin, 2009 and “Goyder” (Garry West with theodolite) and crew after dis-embarking.

A grand event was held in 2009 to commemorate the 140th anniversary and the subsequent opening of the Overland Telegraph Line to Adelaide in 1872. Historic morse code equipment was set up in a communications tent by the Morsecodians Fraternity SA/NT Chapter. Darwin’s then Lord Mayor, Graeme Sawyer, greeted the re-enactment boat party on arrival and sent a telegraph message to the Lord Mayor of Adelaide, Michael Harbison, who replied to advise he had received word of the landing.

The re-enactment of the boat landing was discontinued after a couple of years due to problems with the February weather and tides. On Goyders Day 2016 the event was held at the opening of Goyder Park on the Darwin Waterfront. The Park is located on the site of the original camp at Fort Point and shows the location of camp buildings together with interpretative panels giving information on various aspects of the Goyder expedition.

The 150th anniversary in 2019 was another grand affair. Sony Kent did a fine job by organising multiple events that included a reception at Parliament House, a family day on the Waterfront and functions at Goyder Park and Roadmasters House. The NT Library and NT Archives also mounted displays to mark the occasion.

Goyder’s Day 2020 will not be grand as last year but the Trust is keen to continue this annual event with the following program.

One of the stalwarts of Goyders Day since its inception was Trevor Horman. He will be greatly missed this year.