EventNew South WalesRiver on the Brink: inside the Murray-Darling Basin 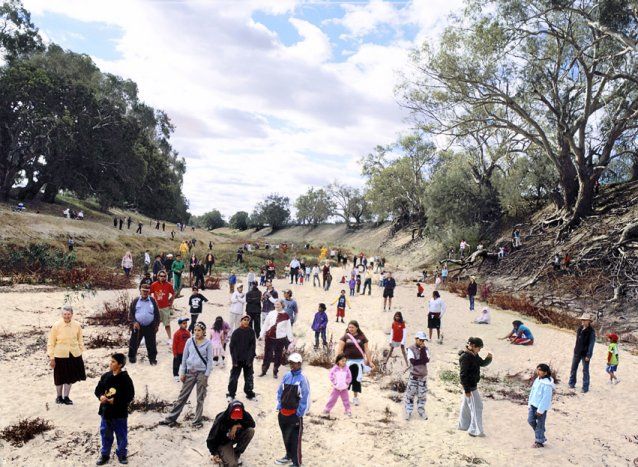 This timely exhibition presented in collaboration with Broken Hill Regional Art Gallery, focuses on what is the most pressing environmental crisis of our time: the on-going devastation of the Murray-Darling Basin.

Historically, the Murray-Darling Basin has long been subjected to the natural extremes of flood and drought along with periods of equilibrium. However, in this age of climate change and the on-going mismanagement of precious water resources, the Basin’s river systems have been decimated and peoples well-being destroyed. The recent apocalyptic fish kill in the Darling River triggered a national outcry. Now is the time to address this environmental emergency and demand REAL lasting action at the highest levels. The water held captive by commercial interests MUST be released to rejuvenate the rivers, and bring life back into the Basin.

River on the Brink is a creative response by a select group of artists, committed to the well -being of the fragile interconnected riverine systems that make up the great Murray-Darling Basin.  With the Darling River teetering on the brink, it’s time to re-think the industrial agricultural enterprise responsible for much of the on-going environmental degradation of Western New South Wales.

Art, by mysterious means, has a way of penetrating the hearts and minds of people prepared to pause and look. Led by Barkindji artists, the powerful revelations on display at the S.H. Ervin Gallery in September 2019, followed by Broken Hill Regional Art Gallery in May 2020, will re-enforce the need to act now and save our vital waterways.

Water as life: the town of Wilcannia and the Darling/ Baaka  2006