Come fly with the Illawarra Shoalhaven branch of the National Trust at the HARS Aviation Museum as we explore Australia’s Major Passenger Aircraft Heritage. 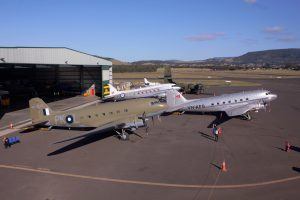 National Trust Illawarra Shoalhaven Branch and HARS Aviation Museum presents their major passenger aircraft aviation heritage.
With a senior HARS member as your guide, explore selected artefacts of Australian Passenger aircraft heritage, including:
* A full sized replica of the ‘Southern Cross’ flown by Sir Charles Kingsford Smith.
* Three flying variants of the famous Douglas DC3/ C47 Dakota which have given sterling service as a military transport and civilian airliner.
* A Douglas DC4/ C54 ‘Skymaster’ – a four engine transport which replaced the DC3 and was used by Qantas.
* A Trans Australia Airlines (TAA) configured CONVAIR 440 twin engine aircraft.
* A flying Lockheed Super Constellation (Connie) which was the aircraft type used by QANTAS to introduce around the world air services.
* The Qantas ‘City of Canberra’ Boeing 747-400 which still holds the London-Sydney non-stop flight record and delivered to HARS in February 2016.
* Access to restricted heritage archives.
Where feasible visitors will see interiors, including the cockpits.
Enjoy morning tea and orientation, then the tour, followed by a light lunch.
HARS is a world class collection of historic aviation planes and artefacts, based at Albion Park NSW.
This is an exclusive tour only offered through the National Trust and not available to any other organisation or a walk-up enquiry to HARS for a guided tour.
Transport Options – There is ample parking immediately outside HARS if you wish to drive. A rail journey is recommended as the NSW CityRail station (Albion Park Rail) is opposite the airport runway and approximately a five minute walk to the HARS entrance.