Our properties remain temporarily closed. Thank you for your patience as we prepare for the easing of lockdown restrictions and welcoming you back when it is safe to do so. Please check the website for property opening times.

EventNew South WalesMyths, Legends and Gods: Lindsay and his world

This exhibition features Norman Lindsay’s world merged with the world of legend and mythology and his artworks and sculptures including the legendary Sphinx.

Norman Lindsay, even as a child, gained great pleasure from reading adventure stories, ancient myths and legends. He loved the Greek gods, the lost world of Atlantis, the haunting Sirens whose song could lure sailors to their death, and in particular, Homer’s epic, The Odyssey.

That myths and legends were both his inspiration and fascination is evident by the many artworks wherein fantastical creatures such as nymphs, fauns, satyrs, centaurs, sphinx and sirens appear. Lindsay’s world merged with the world of legend and mythology and his artworks and sculptures included everything from the legendary Sphinx, who guarded the road to Thebes, to Satyrs and Fauns, who were the companions to Dionysus, and Sirens, who represented the sea song that lured mariners to their death. His fascination and inspiration came from the Greek Gods such as Pan, Eros, and Aphrodite, as well as fantastic creatures like the Pegasus, Unicorns, Centaurs and Mermaids, and all of these are represented in the works in this exhibition – even the lost world of Atlantis! 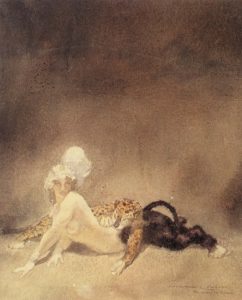 To ensure the health and safety of the community, the National Trust (NSW) is opening its properties with pre-booked tickets.

Tickets to Myths, Legends and Gods: Lindsay and his world will be available via Eventbrite shortly.

END_OF_DOCUMENT_TOKEN_TO_BE_REPLACED

The home-turned-galley of Norman Lindsay, featuring paintings and garden sculptures for all ages.
END_OF_DOCUMENT_TOKEN_TO_BE_REPLACED
Menu