Both the 2-3pm and 4-5pm tours are now fully booked and a waiting list applies.

The Kurrajong Hotel is an integral part of the development of Canberra as the national capital of Australia.

During 1924, the planning of Canberra as the Federal seat of government was underway.  Since the federation of the former Australian colonies in 1901, a national parliament and supporting government agencies had been located in Melbourne.  Establishing the seat of government in Canberra meant that a major part of the government agencies and parliamentary staff had to be relocated to the new developing capital.  Suitable accommodation also had to be provided for the politicians themselves.  Accordingly, a number of hostels were planned and built during the 1920s.

The present Kurrajong Hotel was one of the first hostels to be constructed.  Designed by the government architect, John Smith Murdoch, in 1924, it was known simply as ‘Hostel No. 2”.  The name was later changed to ‘The Kurrajong”, deriving its name from the Aboriginal word describing the small hill rising above the Molonglo River where it was situated.

The Kurrajong has had a long history closely associated with the politics and indeed the development of Canberra.  Two of its better-known residents were Prime Minister John Curtin and his Treasurer Ben Chifley during the dark years of the Second World War.  After the war, Ben Chifley resided there as Prime Minister and while in opposition he had a fatal heart attack and died suddenly. His room is a special place within the hotel.

The ACT National Trust in partnership with TFE Hotels will conduct the tour of the hotel. Historian, Dr Peter Dowling, and heritage architect, Mr Eric Martin AM, from the National Trust, will discuss the important and significant part the hotel has played in Canberra’s history, it’s ups and downs over the years, its architectural changes and modernization.

The Kurrajong Hotel was classified by the ACT National Trust in the 1970s, and was nominated by the Trust to the ACT Heritage Register in 1998.  Today, the Kurrajong Hotel still has an important place in Canberra’s built and social history. 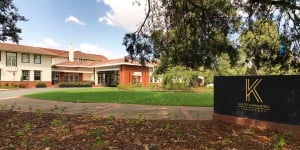