Versatile and multi-talented in his own right, with a natural ability for drawing, Kingston was inspired from an early age by films and comics to create quirky cartoons and illustrations, later contributing to university magazines and eventually the infamous Oz magazine of the 1960s, becoming part of Martin Sharp’s Yellow House collective in Potts Point, where he would also experiment with film-making. 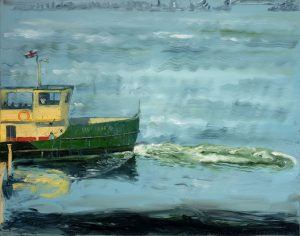 This exhibition is in some respects based on an epiphany experienced by Sydney artist Peter Kingston (born 1943) following the death of his close friend and Lavender Bay neighbour Brett Whiteley in 1992. It seemed that at last Kingston was released from an enormous shadow of talent, skill and success of his mentor to embark with his own sense of poetic language conveying an abiding passion for a subject he had had grown up with from childhood: Sydney Harbour.

But it was after he moved into and purchased the house next door to Whiteley, within view of another of his Sydney icons Luna Park, Kingston would go on to create some of his most impressive works. These are the revelatory crux of this exhibition, draughtsman and painter recording a natural, spectacular synergy between nature and civilisation. Through the great fluid energy and character of the Emerald City, its changing moods, the perpetual ebb and flow of ferries, Kingston has frequently featured its iconic Opera House, an epicentre of grand spaces of surrounding waterways framed by skylines of human activity. Night or day, he has responded to its evanescent beauty through his pictorial symphonies:

I have seen countless nights watching the moon reflect upon the water and the shadow of this great building creating colours and unique impressions each passing day.

A small group of display cases will include selections of Kingston’s artist books, prints, sketchbooks and memorabilia, and a wunderkabinet containing nostalgic relics of his earlier incarnation as pop-illustrator-satirist, precursor to the main body of post-1990 celebrations of his most beloved subject.

The exhibition coincides with the release of a monograph published by The Beagle Press – Peter Kingston: Paintings and Drawings.