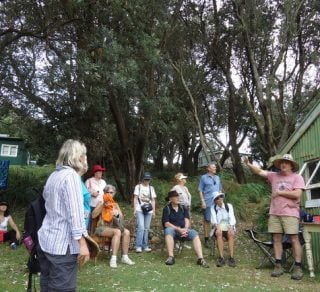 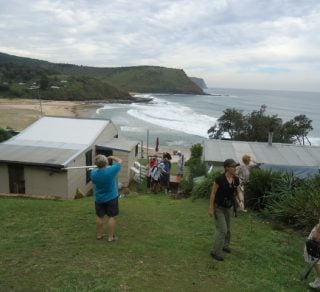 Join us for a guided walking tour of the Era shack community in the Royal National Park and see how the shacks at this remote location were built and maintained by the owners. Hear the stories of how the shacks survived to be listed on the State Heritage Register in 2012.

A guided walking tour of the coastal cabin communities within Sydney’s Royal National Park. Presented by the Royal National Park Coastal Cabins Protection League the tour will give participants the opportunity to glance back into history and learn how the remote shacks were built and maintained by their owners. Participants will be able to hear the stories about the shacks directly from owners themselves; and have their questions answered.

The shacks are a significant example of Depression era architecture; many still make use of 1950s technology. The shacks gained state heritage recognition in 2012. The tour will commence at 10am at the Garawarra Farm Car Park visiting number of shacks at Era Beach. The area is only accessible via a steep bush track approximately 30 minutes in duration each way.

Enjoy a cup of tea with shack owners and learn the simple living and colourful history of this unique place. The tour concludes with a BBQ lunch at Era Surf Life Saving Club. Bookings a must.

Directions: turn off Sir Bertram Stevens Drive at Garie Road. Turn right onto sign posted dirt track to Garawara Farm. Meet at 10am. The dirt track to the car park is in poor condition, drive slowly. You will be guided to shacks that are open at the community. Bring water, sunscreen, swimming gear. Fitness for a steep bush track 40 minutes down, 50 minutes back up required. NPWS entry fees apply, event free.

10am -2pm. Bring walking shoes, water, sunscreen and swimmers. The event is free however NPWS park use fees apply. The tour may be cancelled in wet weather.