The Rialto and warehouse precinct

In the early 1970s, despite redevelopment, the port end of Collins and King Streets still had a predominance of Victorian buildings. The battle to preserve these buildings resulted in some losses but succeeded in saving some remarkable streetscapes. 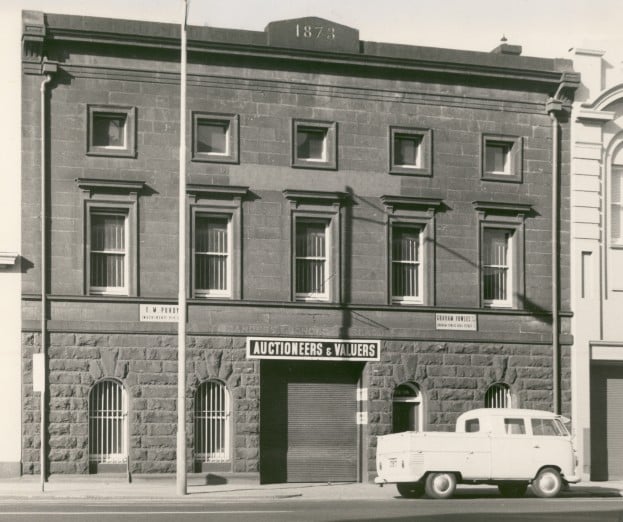 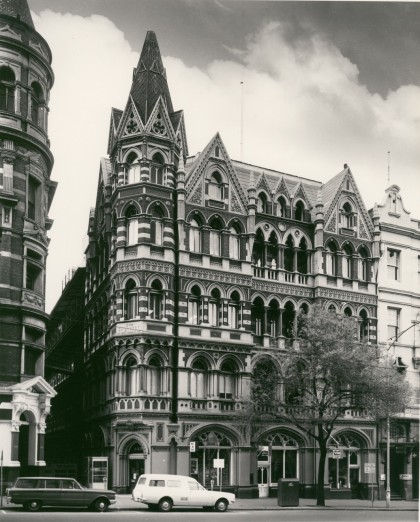 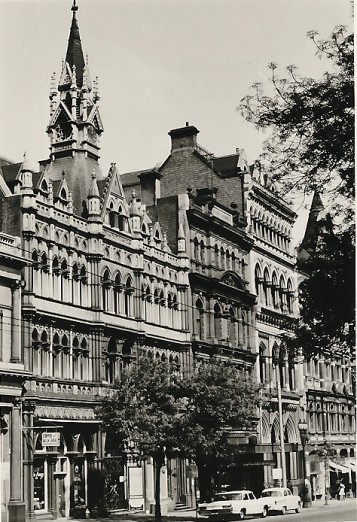 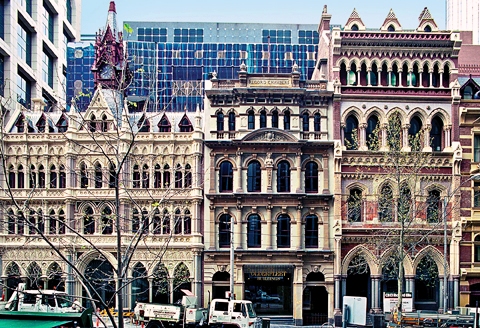 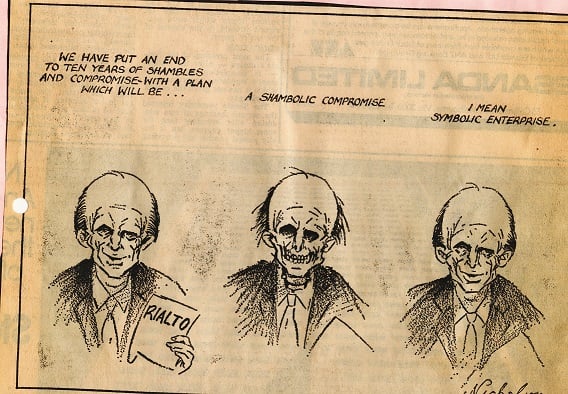 As the river port of Melbourne boomed during the 1850s, a series of bluestone warehouses were constructed at the bottom end of King Street.

They were constructed between 1854 and 1857 for ship owners, coal merchants and ironmongers servicing the port. In the next 30 years more warehouses and industrial buildings were added that together formed a remarkably consistent streetscape.

During the land boom of the 1880s, entrepreneur Patrick McCaughan purchased property on Collins Street between King and William Streets. On this land McCaughan collaborated with Melbourne architect William Pitt on two significant commercial buildings. The first was the Gothic revival style Olderfleet Building completed in 1891 at 475–77 Collins Street. Later that year the Rialto building was completed at 497–503 Collins Street. These buildings, along with Record Chambers, the South Australian Insurance Building and the Winfield, formed an outstanding streetscape.

During the 1970s the National Trust began to advocate for the protection of streetscapes, not just individual buildings.

The Rialto precinct became a turning point in articulating this position of group significance. In opposing a 1976 request by owners National Mutual to demolish the Winfield, the National Trust argued that the whole streetscape was important. In 1979, the Trust also opposed the demolition of the 1885 Robb’s Building on the grounds that it had considerable streetscape importance as an anchor for the land boom Gothic buildings in Collins Street and the bluestone King Street warehouses. However, the preservation of entire streetscapes was hampered by the lack of appropriate statutory tools.

After years of debate and campaigning, a final compromise was reached in the early 1980s.

After succesful opposition to an application to demolish the impressive rear wing of the Rialto, in 1980 National Mutual sold everything west of the Winfield to the Grollo Group. The new owners planned a pair of high rise office towers and, despite previous planning difficulties, within 12 months had reached a compromise with the State Government. This saw the Rialto, with rear wings retained, combined with the Winfield to become an atrium-style hotel. While the King Street warehouses were spared, Robb’s Building was sacrificed to allow a plaza for the development of the Rialto office tower, then the tallest in Australia. The front portions of the Olderfleet Building and the two remaining buildings in the streetscape were retained, with a low office development built behind in 1985.