Melbourne has also lost some of its most architecturally and socially significant examples of Modernist heritage. 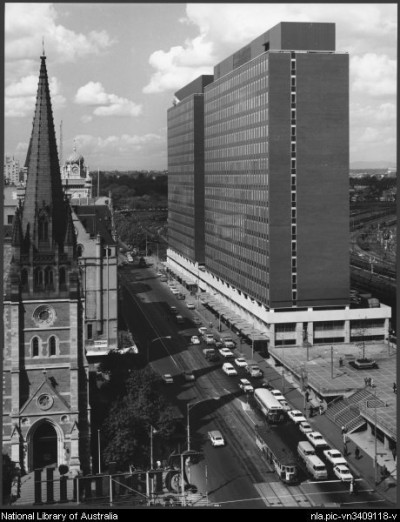 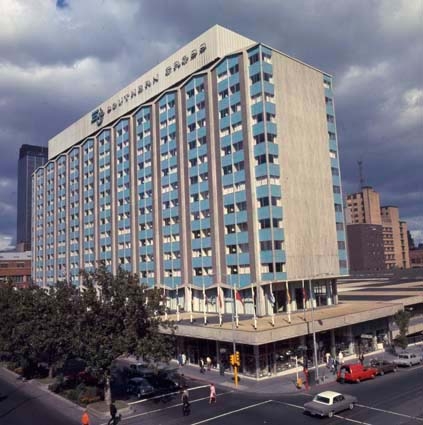 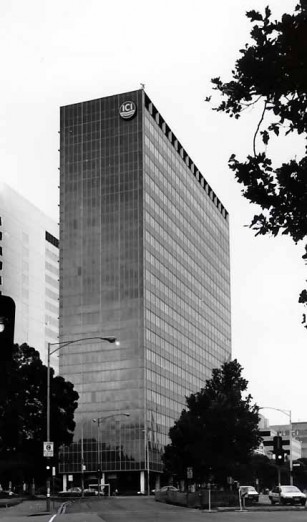 The demolition of the Gas and Fuel towers met little resistance.

Designed by Leslie M. Perrott and completed in 1967, the two towers located at 135 Flinders Street were labeled by author Barry Dickens as ‘an antidote to beauty’. The proposed demolition of the towers provoked debate about the value of protecting buildings popularly perceived as ‘ugly’. In 1996 work finally began on their demolition as part of the Federation Square development. The demolition was unopposed by the Trust, given that the tower’s presence blocked the vista from the south bank of the Yarra River towards Flinders Street.

The hotel where the Beatles stayed was a symbol of Melbourne’s growing sophistication.

The hotel where the Beatles stayed was a symbol of Melbourne’s growing sophistication.
Opened live on television by Prime Minister Robert Menzies on 24 August 1962, the Southern Cross replaced the grand but virtually unused Eastern Market. The angular ‘Featurist’ hotel between Bourke, Little Collins and Exhibition Streets had a coloured exterior and was designed by US International Hotel specialists Welton Becket & Associates. Reigning as ‘the’ hotel for decades, hosting the Beatles in 1964 and the Logies, by the 1980s the Southern Cross had been superseded and was regarded as simply ‘60s kitsch’. Closed in 1995, after a failed bid to have it listed by Heritage Victoria, the Hotel was demolished in 2003 to make way for a new office complex.

Completed in 1958, ICI House was a source of civic pride for a Melbourne community experiencing the painful process of postwar reconstruction. The building was a major architectural achievement that incorporated for the first time in Australia a complete glazed curtain wall façade. In 1988 the National Trust objected to a proposal to significantly alter the building’s ground floor lobby and undercroft and, after negotiations with the Melbourne City Council and architects Bates, Smart & McCutcheon, these plans were substantially modified. Subsequent lobbying led to ICI House becoming the first modern office tower listed on the Victorian Heritage Register.