The exchange of the Government-owned Spring Street property for the significant Tasma Terrace required an Act of Parliament. Public outcry at the proposed demolition of both sites led to Union intervention and a 5,000 signature petition. 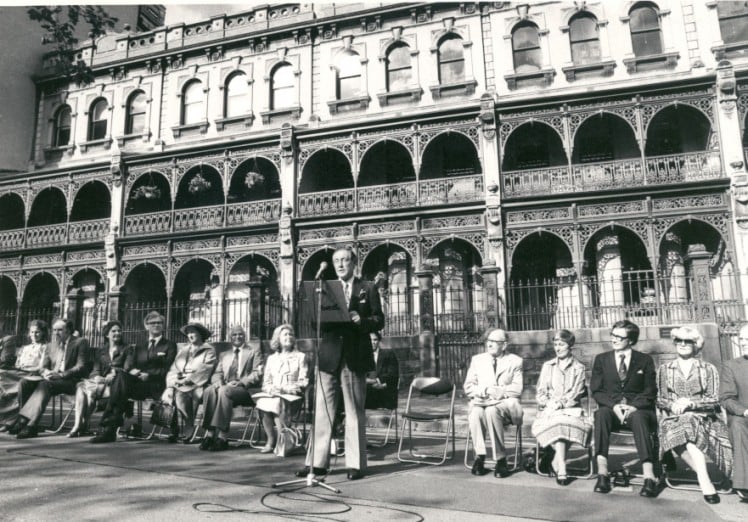 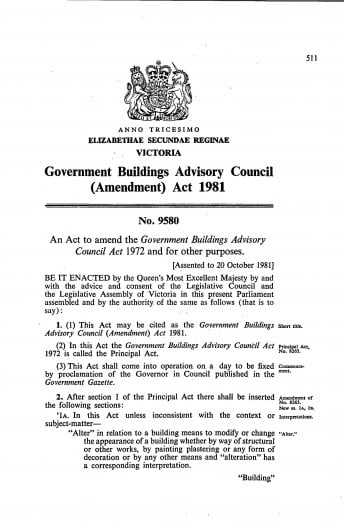 In 1876 the western garden of Dr Howitt’s residence, on the corner of Collins and

Spring Streets, was sold to William Campbell, a noted pastoralist and politician. The impressive two storey brick and stucco house was built for him the following year. In 1901 the house was sold to the Commonwealth Government and used for Federal and, later, State Government Offices.

Tasma Terrace served as a boarding house before being threatened with demolition in the early 1970s.

10, 12 and 14 Parliament Place (the first three terraces) were constructed for George Nipper, who so liked them that he commissioned architect Charles Webb to design his new project in Spring Street, the Windsor Hotel. The terraces were sold in 1887 and the additional buildings at 2, 4, 6 and 8 were built to the same design and used as commercial boarding houses. In 1940 Nipper’s home at 14 Parliament Place was demolished.

Early 1970s concern for heritage preservation was acknowledged by Government.

In 1970 an Act of Parliament was passed allowing the exchange of the State Government owned 61 Spring Street for the privately owned Tasma Terrace. This exchange raised concerns over the future use of the buildings and redevelopment of the sites. In 1971 a 5,000 signature petition was presented to the Minister for Public Works calling for the preservation of Tasma Terrace. In response to community sentiment, in May 1972 the Government Buildings Advisory Council was created through an Act of the Victorian State Parliament.

Union ‘Green Bans’ and a new Committee of Management helped save the buildings.

In 1972 the Buildings Advisory Council recommended the preservation of Tasma Terrace and a year later the State Government appointed the National Trust as the Committee of Management. The building was officially opened as Trust headquarters in March 1979. 1972 also saw 61 Spring Street

slated for demolition. A campaign to save the building gained momentum with the last minute imposition of a Builders Labourers Federation green ban in late 1972. By 1981 the proposed development site had expanded to include the buildings at 5, 7 and 9 Collins Street. The campaign to preserve all the buildings continued but compromises were made, including the demolition of the later additions to 61 Spring Street. In 1982 the front 10 metres of 5–9 Collins Street and the original townhouse at 61 Spring Street were incorporated into a new development known as 1 Collins Street.