From possibly as early as the 1500s to 1907 fishermen from Makassar would sail with the North-West monsoons to the northern coast of Australia in search of Trepang (Sea Slug) for the lucrative trade with China (generally around December). In some years up to a thousand fishing, praus would descend on the Northern coastline with some boats having as many crew as 30. They would fish for Trepang and trade with the local aboriginal population until favourable wind conditions, generally the South West trade winds allowed them to return to Sulawesi now part of Indonesia (May-June).

A replica of a fishing prau was recently in Darwin on its way to Nhulunbuy for a re-enactment of Indigenous and Macassan interaction and trade links. The Prau recently constructed in Indonesia using traditional methods and materials of the 1700s era is the sister ship to the “Hati Marege” built in 1988 and now housed in the Northern Territory Museum in Darwin. The fate of the Prau is uncertain once the engagement at Yirrkala is undertaken. A voyage to Sydney to meet up with the replica ‘Endeavour” is something being considered by the owners, given Australia’s recent trade agreement with Indonesia.

In the dock at Ludmilla Creek Spot ON Marine facilities cleaning out ballast (40 tonnes) and bilges to comply with Border Force Security requirements.

All the materials, cooking facilities, using charcoal stove, bamboo rattan, windbreaker, bamboo flooring, clay bowls and coconut drinking vessels, woven baskets for storage and hand manned bilge pumps are as it would have been in the 1700s. The only consideration of modern technology is a life Buoy, fire extinguishers, a solar panel for safety – radio transmissions and International flags on the Mast!

There are a number of reminders of the Macassan’s visits to Northern Australia over the years including the introduction of Tamarind Trees at coastal camping locations near old stone wells, the introduction of   Macassan words to Indigenous languages the exchange of peoples and cultures. 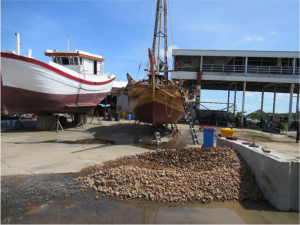 The Prau next to a Vietnamese fishing boat with the ballast at the front of the boat waiting to be reinstalled!